A TRAIN buff’s stunning collection of model steam engines that he used to drive around his back garden has sold for a whopping £530,000.

Jack Salem — who died in 1986 — was a steam train enthusiast and spent 40 years commissioning expert train builders to make the model engines for him.

The locomotives were exact working replicas of real engines from the “golden age of steam” — and many were built using the original drawings for the bigger versions.

Ex-Lancashire mill owner Jack retired to Switzerland in the 1960s, where he had a half-mile long track — complete with stations, tunnels and viaducts — built in his garden.

A train buff's stunning collection of model steam engines that he used to drive around his back garden is set to sell for £250,000.

He spent many happy years chugging around on his coal-powered trains — with each engine capable of pulling up to 30 carriages.

Jack’s children decided to sell the precious collection following the recent death of his widow.

The highlight of the sale was the scaled down version of the Duchess of Buccleuch — described as the “Rolls Royce” of the models by auctioneers.

Fierce bidding from train fans for the 10ft maroon coloured engine — which took 10 years to build — led to it selling for £183,000 pounds, more than three times its pre-sale estimate.

Other big sellers were The Welch Regiment for more than £55,000 and a Great Western Railways locomotive called Windsor Castle for £44,000.

Auctioneer Michael Matthews, of Dreweatts of Newbury, Berks, which sold the engines, said: “The model steam engine auction proved to be an electric sale.

“There was a huge amount of interest and a lot of competition from bidders in the room and on the phone.

“We are delighted with the outcome. I think the family had mixed emotions about the sale.

“They were obviously pleased with the results but it was quite emotional for them because of the connection the engines had with their father.”

Mr Matthews added: “It is the finest collection of model-engineered locomotives to have ever come on the market.” 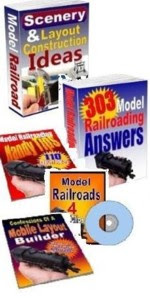 Ghost Guns
I am the author of The Coldest Equations

The Convenience of Kindle